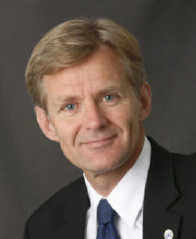 Jan Egeland is the current Deputy Director of Human Rights Watch and Director of the Norwegian Institute of International Affairs. In the past he has held a number of significant humanitarian positions including the United Nations Under Secretary General for Humanitarian Affairs and Emergency Relief Coordinator, Secretary General of the Norwegian Red Cross and State Secretary in the Norwegian Ministry of Foreign Affairs. Among his accomplishments, he co-initiated and co-organized talks between Israel and the Palestine Liberation Organization in 1992 that lead to the Oslo Accords in 1993. Additionally, he has worked extensively on the alleviating humanitarian conflicts in Uganda, Darfur, and the Democratic Republic of the Congo. Furthermore, he also took a role in campaigning for the needs of those affected by natural disasters such as the 2004 Indian Ocean Tsunami. For his many accomplishments he was referred to by Time magazine as “the world’s conscience”. Jan Egeland has written a book titled, “A Billion Lives: An Eyewitness Report from the Frontlines of Humanity”, in which he chronicles his many experiences in tackling human suffering.required from various sectors and actors to reduce disaster losses.

Mr. Egeland explained that climate change impacts vulnerable populations in many ways, including through its augmenting affect on natural hazard frequency and severity.

Although rich countries are readily able to both detect and implement security provisions, the majority of countries only have either essential or inadequate climate services, which can be debilitating when dealing with natural hazards. According to the World Meteorological Organization (WMO), six countries have no climate services whatsoever.

Tech savvy services
It may seem, from the availability of climate services, that not much attention is being paid to improving the technology involved in climate services. This is simply not true. Climate services available today are more advanced than ever, the challenge therein is providing and making these services readily available to those that need it most, Mr. Egeland affirmed.

What needs to happen is a multilateral cooperative effort that combines the efforts of those who have advanced climate services and understand the implications of the climatological data, with the efforts of those who do not have these services but are most vulnerable, to create a united front against the negative affects of climate change. By prioritizing the communication of climate services and the provision of disaster risk reduction measures to populations most vulnerable, lives could be saved.