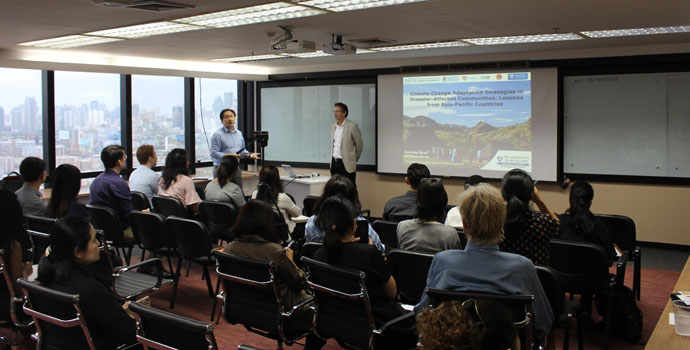 His lecture in front of about 20 participants from ADPC and elsewhere analyzed field observations from communities in Cambodia and Fiji to determine how their resilience and adaptive capacities are enhanced or constrained from living in areas where natural hazards are common.

While he found that people are generally resilient to risks they face regularly (e.g. seasonal flooding in Cambodia) there are a number of cultural, societal and economic factors that affect how people cope with natural hazards and how individual’s adaptation methods may leave others open to vulnerabilities. A term known as ‘risk redistribution.’

He used the example of someone with the economic means to move their home uphill to escape flood risks. While this may cause one household to become safer, when they clear the land for agriculture purposes, it actually puts the people living downhill more at risk to flash floods due to deforestation. This, he explained, makes it hard to coin all adaptation strategies as appropriate or successful since safety for some does not mean safety for all.

Communities also face many challenges adapting in a multi-hazard environments due to the trade-offs in adaptation strategies. One example from Fiji includes how after flooding people built elevated homes, only for them to be knocked down during a hurricane.

“Fijians are extremely resilient, but their efforts to adapt keep getting destroyed, which begins to really affect their motivation after a while,” said Professor Neef. “Some people don’t even invest in furniture anymore, they say it’ll either get swept away in the next flood or blown away in the next hurricane,” he continued. 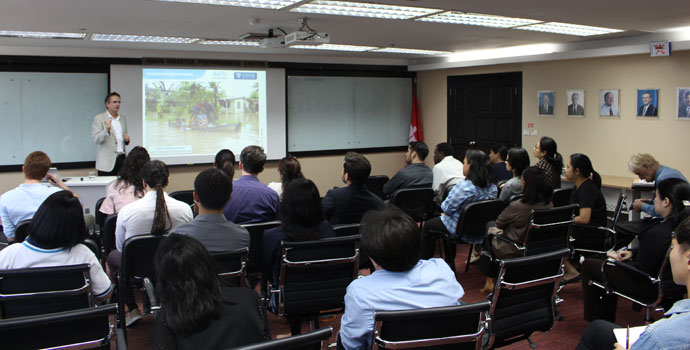 His observations also found that while women are often seen as disproportionately affected by disasters they can play a very strong role in disaster risk reduction. He observed women being involved in disaster preparedness activities, such as storing food for emergency situations, and planning recovery strategies.

The psychosocial effects disasters have on communities were also detected during his research in Fiji with many people referring to the terror caused by Cyclone Winston. Members of the community described the event as being so loud it sounded like a jet engine was flying overhead, a frightening experience for the adults and children since no one had experienced such an intense event before. In one case, someone became so traumatized they actually lost the ability to speak.

Professor Neef ended his lecture stating that resilience and adaptation needs to be understood relative to a very localized context, and that communities just a few hundred meters apart had very different perceptions of risk and adaptation methods.
Major funding for his research is provided by the Asia-Pacific Network for Global Change Research (APN).

You can watch his full lecture on Youtube by clicking this link.