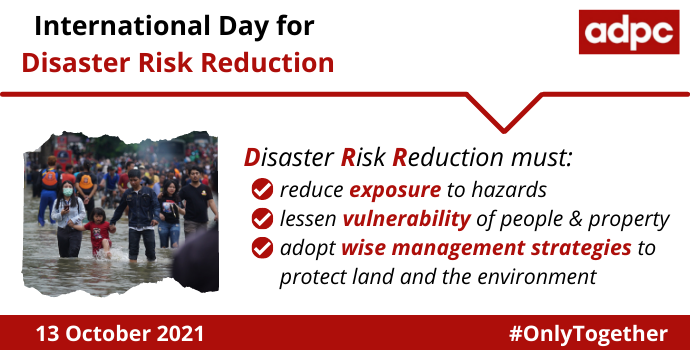 Prevention, mitigation, and response are the key components that encourage disaster risk reduction (DRR), but without the involvement of all concerned and affected stakeholders, disaster preparedness and resilience will remain a top-down and exclusive outcome.

The International Day for Disaster Risk Reduction 2021 focuses on “International cooperation for developing countries to reduce their disaster risk and disaster losses.” Asian Disaster Preparedness Center (ADPC) sheds light on the progress made toward the successful collaborative efforts of DRR in Asia and the Pacific region, and continues to promote regional cooperation on such initiatives through collaborative partnerships and a diverse set of expertise in its strategic themes. 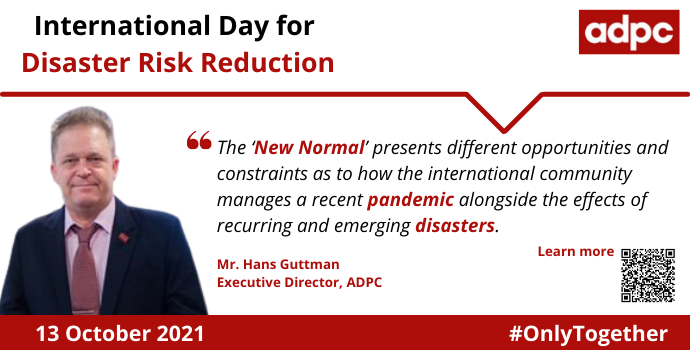 This year, according to UN ESCAP Asia-Pacific Disaster Report 2021, the region accounted for 57% of global fatalities from disasters and 87% of the global population that has been affected by natural hazards. The report further adds that between 1970 and 2020, natural hazards in Asia and the Pacific affected 6.9 billion people and killed more than 2 million, which equates to 41,373 lives per year or one life lost every 13 minutes!

Mr. Guttman also advised that as we enter the new decade, with a tight deadline to achieve the Sustainable Development Goals (SDGs) by 2030, that the COVID-19 pandemic serves as a critical reminder that everyone is responsible for preparing for all types of health, disaster, and climate risks. Read the full report and some other notable ADPC achievements here. 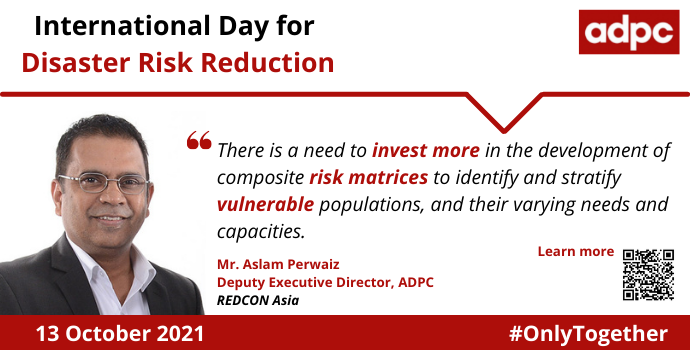 Mr. Aslam Perwaiz, Deputy Executive Director of ADPC, spoke on financing resilient development for supporting the Implementation of the Sendai Framework in Asia and the Pacific Region at the Resilience on Emergency and Disaster Conference (REDCON) Asia’s webinar on 'Partnership for the Framework 2030: Creating an Enabling Environment for Cooperation to Support Developing Countries'. The webinar was organized in anticipation of the International Day for Disaster Risk Reduction.

Mr. Perwaiz insightfully pointed out that systematic integration of resilience at the initial stages of development the planning is not supported with appropriate financing. So, there is a need to invest more in developing composite risk matrices to identify and stratify vulnerable populations and their varying needs and capacities.

Rural and coastal communities are exposed to climate-induced extreme events, such as erratic rainfall, flooding, sea level rise, cyclones, and salinity intrusion. In this regard, disasters have exacerbated migration to cities, resulting in unplanned and rapid urbanization.

ADPC launches its 5th 'Climate Talks' on International Day for Disaster Risk Reduction to raise awareness on sea level rise—an impact of climate change that is directly related to an increase in disasters and is becoming a rising threat to people's lives and livelihoods. Watch the full episode here. 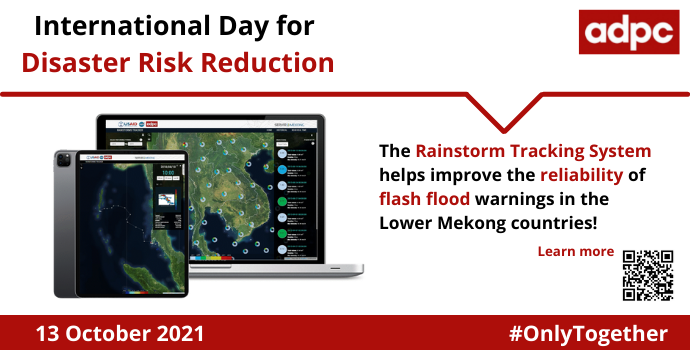 The Earth is witnessing a warming of the climate system that is unprecedented. This warming is causing sea levels to rise, floods and droughts to occur more frequently, and ecosystems to change dramatically, thus threatening livelihoods. The question now, is, what can we do?

The Rainstorm Tracker also includes data on population distribution and critical infrastructure such as roads and hospitals. Combining such exposure and vulnerability data with rainstorm severity enables decision makers to estimate the risk faced by people and infrastructure at the district level. As a result, decision makers can take preventive measures to reduce loss of life and property and increase the resilience of communities to climate change across the region.

SERVIR-Mekong provided satellite imagery, data and decision support tools to the MRC to assist the MRC in implementing its Drought Management Strategy (2020 - 2025). As a result, farmers have advanced information to mitigate the impact of droughts on their crops and policy makers have better data and tools to develop and implement drought prevention and mitigation strategies. 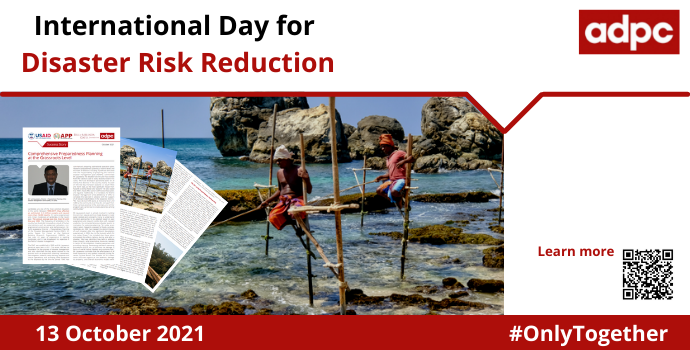 Landslides are one of the most common disasters in the world. Between 1998-2017, they affected an estimated 4.8 million people and caused more than 18,000 deaths. Sri Lanka experienced only minor incidences of landslides in the recent past.

The annual average was less than 50 until the year 2002. The frequency of landslides in the country has drastically increased as a result of human interventions such as unplanned cultivation, non-engineered construction, and deforestation.