How Geospatial Technologies can support Preparedness for anthropogenic disasters

Environmental and anthropogenic disasters have become more frequent and draw stronger attention from the public in Southeast Asia about the importance of economic, human and environmental impact. Satellite Earth Observation has been largely used in monitoring environmental disasters such as flooding, primarily due to the large geographic coverage that naturally such catastrophes take place over. Since anthropogenic disasters are usually spatially restricted, the usability of Earth Observation often goes unnoticed.

For instance, a massive explosion occurred at a factory in the vicinity of Suvarnabhumi airport in Bangkok, Thailand on 5th July, 2021. The event took place around 3:00am in at the factory of Ming Dih Chemical Co, Ltd, which produces polystyrene foam and processes highly flammable base chemicals. The ensuing fire raged for more than a day, killing a rescue worker, wounding 29 people., damaging 70 houses, and releasing toxic chemicals into the air and water; this forced authorities to evacuate thousands of people living within five kilometers of the site of the explosion.

Such accidents require rapid attention and mitigation from the emergency authorities. While human intervention in such cases is indispensable, auxiliary information sources can aid response organizations in coordinating immediate relief actions, and monitoring events and post-damage recovery efforts. Satellite Earth Observation has largely been used in environmental disaster monitoring, such as floods, fires, landscape alteration, etc. However, its usability in unexpected events, such as the unforeseen explosion at Ming Dih Chemical Co factory, has still not been realized sufficiently in the emergency response context.

Satellite Earth Observation started in the 1960s, using primitive and conventional black-and-white camera systems mounted on board satellites and acquiring low-quality images, often unsuccessfully, before parachuting back to the earth with the expectation that the film would be retrieved and processed in the lightroom.

Fast forward to the end of the 20th century: a large number of satellites with specialized camera systems were orbiting the earth and providing data frequently and remotely to ground stations, for further processing by a remote sensing expert and GIS analyst. This was the era of experimentation with different satellite sensors, specifications, algorithms and applications, which yielded extensive knowledge and wisdom on the usability, capabilities, and limitations of remote sensing.

Things have evolved since then, and with the advent of cloud computing, an ever-increasing number of operational satellites and the stimulation of open data policies, new capabilities in earth observation have been unveiled. The amount of satellite data available is now considerably larger, and some of it is openly and freely available; due to the open access policy adopted by major space organizations (e.g., the Landsat and Copernicus programmes).

Moreover, radiometric quality and spatial resolution have improved considerably as the result of taking advantage of the use of higher-end hardware. Most importantly, in the context of disaster management, the availability of data almost in near-real time and the processing capabilities opened up by cloud computing and recent algorithm development gives rise to the potential of near-real time applications based on earth observation.

This new era of satellite information abundance is the ideal foundation for galvanizing the new capabilities of remote sensing. It also helps in translating the raw data into knowledge and wisdom which can actively contribute to addressing environmental problems and monitoring events with geographical content.

In the context of the Samut Prakan factory explosion, satellite imagery provided near real-time information related to the event. A high spatial resolution (10m Sentinel-2) image acquired on the day of the event clearly demonstrates the smoke plume intensity and direction (Figure 2). This information can guide local authorities and the residents in the vicinity of the accident as they plan to protect themselves from potentially toxic smoke plumes. 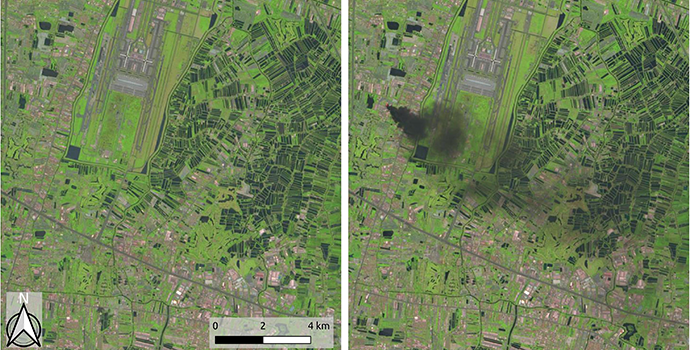 Figure 2. True color representation of Sentinel-2 images acquired before (20 June 2021) and on the day (05 July 2021) of the event. Satellite products from the twin Sentinel-2 satellite system are provided almost worldwide every five days (at the equator) at 10m spatial resolution, in support of monitoring land surface changes.

Additionally, a comparison between imagery from the same sensor before and after the event can demonstrate the impact of the disaster on both landscape and environment. Auxiliary data from the Terra Moderate Resolution Imaging Spectroradiometer (MODIS) satellite can visualize the event at higher temporal resolution (but at the expense of spatial resolution), providing up to date satellite information for monitoring purposes (Figure 3).

Figure 3. Pseudo-colour representation of MODIS/Terra images acquired before (3 July 2021) and on the day (5 July 2021) of the disaster event. MOD09GQ is the surface spectral reflectance product from the Terra Moderate Resolution Imaging Spectroradiometer (MODIS), provided daily at 250m spatial resolution.

The surface reflectance product provided by the latter satellite is an accurately calibrated product of the solar intensity reflected from the earth. It is used systematically for a variety of applications. The availability of MODIS data, globally and at daily intervals, makes the surveillance and quantitative observations of disasters and the consequent land cover changes possible to be quantitatively observed in near-real time, given cloud-free conditions.

To address the risk of environmental and anthropogenic disasters, it is crucial for governments to develop prevention and preparedness programmes to reduce the likelihood of accidents and limit their consequences. Thus, satellite information is also of paramount importance in preventing or preparing for environmental emergencies at the local level. By identifying patterns of pollution and impacts from previous disasters, local authorities can develop better plans to ensure people’s safety and reduce the impact of disasters on the natural environment.

Earth Observation’s role in post-disaster is also important; Mr. Anuwat Onnuam, Director of Fire and Rescue Fire Operation Unit 1 at the Bangkok Fire and Rescue Department, Office of Disaster Prevention and Mitigation, values the importance of this technology in disaster response. “I believe that satellite imagery plays a role after a disaster incident by providing an overview of the smoke plume direction and the concomitant affected area,” he says.

A vast repository of knowledge is available to facilitate the usage of Earth Observations after a disaster has occurred. For example, the United Nations Environment Programme has developed a comprehensive methodology for environmental and anthropogenic disasters preparedness, especially in the instance of chemical accidents. The methodology comprises five phases, as per Figure 4.

The contribution of satellite information in developing prevention and preparedness plans for environmental and man-made disasters on the basis of such a framework can include, inter alia, the following.

- In the initial phase, satellite images from past accidents can be used to increase advocacy about environment- related disasters and ensure attention and commitment from policymakers. By visualizing the consequences of a disaster, policymakers can justify decisions and allocations of resources.

- In the assessment phase, historical information based on satellite imagery can be used to identify hotspot risk areas, as well as create risk maps and working materials for stakeholder consultations.

- In the development phase, satellite information can be used to understand and visualize the availability and distribution of resources, design impact maps of potential disasters, and identify mitigation options to avoid environmental pollution (e.g. install barriers in water streams).

- In the implementation phase, real-time remote sensing can be used to assess and share the temporal and spatial impacts of a disaster, so as to improve the allocation of suppression resources.

- In the review and implementation phase, satellite information can be used to evaluate the efficacy and efficiency of previous cases; also, to redesign the prevention and preparedness system.