The Ocean: Life and Livelihoods 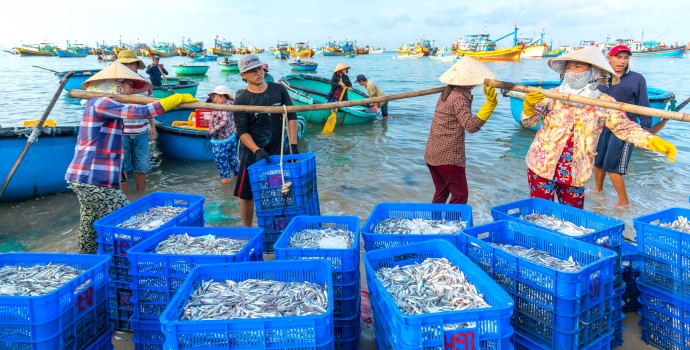 Oceans cover 70% of the Earth’s surface and 97% of all water. They are at the core of the global processes that keep the planet habitable. Over 3 billion people depend on marine resources and coastal biodiversity to support their livelihoods.

The World Bank estimates that the annual market value of marine and coastal resources and industries amounts to US$ 3 trillion (or almost 5% of the world's GDP). Furthermore, the FAO estimates that over 200 million people are either directly or indirectly employed in maritime industries.

Maritime transportation is also becoming environmentally friendly, climate-resilient, and essential for sustainable development and growth. Around 80% of international goods trade is transported by water, with the figure much greater for most developing nations.

680 million people live in areas classified as a Low-Elevation Coastal Zone (LECZ), with that number estimated to rise to 1 billion by 2020.

The Pacific Ocean is the largest ecosystem in the world, covering almost half the globe’s sea surface. It is also home to 22 Pacific Island Countries and Territories (PICTs) that comprise of approximately a third of this vast ocean.

Pacific island cultures essentially revolve around marine life. The lives and livelihoods of PICT people are heavily dependent on the ocean. The Pacific Ocean is their major economic, social, and cultural lifeline, sustains important activities that fuel local, national and regional economies, and provides livelihoods and food security for millions of islanders.

This Ocean holds a wide variety of resources, particularly fish and invertebrates, provides a significant source of animal protein and income from artisanal fishing and tourism livelihoods, and holds important cultural values for communities throughout the Pacific Islands.

There are examples of traditional fisheries management, taboos, ceremonial fishing practices, the use of teeth and bones of marine animals as power symbols, and sacred relationships between individuals and specific marine species that are guided by customary laws.

Fisheries are critical for food security, livelihoods, and economic development in most PICTs. Islanders are engaged both in small-scale and deep-water fisheries.

These fisheries provide sources of income for an average of 50% of households in many coastal communities.

Climate change poses a major threat to marine life with ramifications for marine ecosystems, economies, and societies, particularly those most reliant on marine resources. The majority of the world's oceans are experiencing rising temperatures as a result of climate change.

Ocean warming has already had severe effects on many marine ecosystems, animals, plants, and bacteria, particularly in near-surface waters. Marine resources are strongly influenced by climate change and the health of the oceanic environment.

The repercussions for human society could be severe if significant efforts are not taken to limit future climate change impacts. Scientific studies have shown that the ocean has absorbed much of the extra energy from the enhanced greenhouse effect resulting in the warming up of waters reaching depths of 1000 meters.

This has led to increased ocean stratification (prevention of water mixing due to different properties of water masses), changes in ocean current regimes, and expansion of depleted oxygen zones. Changes in diversity and abundance of species are also observed, threatening the physical, economic, and food security of local communities.

Furthermore, atmospheric warming is leading to the melting of inland glaciers and ice, causing rising sea levels with significant impacts on shorelines and coastal human settlements.

Extreme El Nińo events, associated with the unusual warming of surface waters, are predicted to increase in frequency due to rising greenhouse gas emissions.

On the other hand, the absorption of more CO2 by the ocean makes it more acidic. This process is referred to as ocean acidification, ultimately endangering many marine species and ecosystems.

For instance, the IUCN and NIWA conclude that ocean acidification reduces the ability of marine organisms, such as corals, plankton, and shellfish, to build their shells and skeletal structures due to the limited amount of carbonate available to these species.

Climate change also has decreased the efficiency of the “biological pump” which is the phenomenon referring to the roles of marine microbes in moving carbon from surface waters into the deep ocean. This may severely affect the global carbon cycle.

With ocean conditions undergoing alterations due to climate change, there is a high probability of occurring extreme hazardous events, such as cyclones, storm surges, floods, more frequently in the Pacific Ocean.

As a result, there would be significant socio-economic impacts, such as loss of marine resources, coastal infrastructure, and associated declines in economic, ecological, and cultural values.

Rising sea levels could cause submergence of parts of low-lying coastal lands which are the habitat of an estimated 470–760 million people.

Many Pacific islands are already submerged. It is predicted that between 665,000 and 1.7 million people in the Pacific will be forced to migrate owing to rising sea levels by 2050.

Moreover, with the increase in the temperature regime of ocean waters, there would be high possibilities of severe cyclones and hurricanes forming. The abnormalities shown with the El Nińo phenomena further intensify these extreme hazards. Such events could bring disastrous consequences to humankind when they impact settlement areas.

Tsunamis are another major hazard observed in the Pacific Ocean, and climate change contributes to the degradation of marine ecosystems such as coral reefs and mangrove wetlands which act as natural buffers in attenuation of strong tsunami waves. This fact could bring in very harmful impacts to coastal areas by tsunamis.

Natural hazards in the Pacific region are becoming more intricate, complex, and multi-faceted in its changing climate. The Pacific countries are extremely vulnerable due to their unique geo-climatic locations.

National Meteorological and Hydrological Services (NMHSs) in these countries are mandated and accountable to provide short-range and long-range weather forecasts as well as early warnings to institutions and communities.

Recognizing the fact that the frequency and intensity of hydro-meteorological hazards are on the rise in changing climatic conditions, the existing capacities of NMHSs and National Disaster Management Organizations (NDMOs) will not suffice.

Unpredictability and increasing frequency of extreme weather events require significant improvement in the capacities for weather forecast and early warning in the future.

Hazards observed in the Pacific Islands are strongly interconnected with the changing conditions of the ocean due to climate change.

Some of the examples are tropical cyclones, storm surges, sea-level rise, saltwater intrusion, and tsunamis. These islands are extremely vulnerable to hazards of this nature due to their unique geo-climatic locations in the Pacific Ocean.

Although early warning systems exist in these countries, it requires timely upgrades and modernization of instruments as well as technology. ADPC’s study made recommendations for further advancement of MHEWSs to better prepare for future hazards.

By investing more in climate change adaptation measures, we could mitigate the damage caused to oceans and reduce risks to the lives and livelihoods of people who live nearby and depend on them. Efficient early warning systems are one such measure.

If these recommendations are considered and implemented, people can be better prepared for the disaster events beforehand and can take timely actions to minimize physical and socio-economic losses and build back better.

Chinthaka Ganepola is the Geotechnical Engineer at ADPC