Asian Disaster Preparedness Center (ADPC) completes the process of becoming an intergovernmental organization following the signing of the Host Country Agreement with the Ministry of Foreign Affairs (MOFA), Thailand. The agreement-signing ceremony was held in Bangkok on 7 November 2019 which was also attended by the ADPC’s Board of Trustees (BoT) ─ Bangladesh, Cambodia, China, India, Nepal, Pakistan, the Philippines, Sri Lanka and Thailand.

“It is essential that every country joins in on disaster risk management and that ADPC supports multilateralism as an intergovernmental organization,” Mr. Soonthorn Chaiyindeepum said.

Mr. Hans Guttman said that the signing demonstrates Thailand’s ability and eagerness to serve as a regional hub for international organizations. 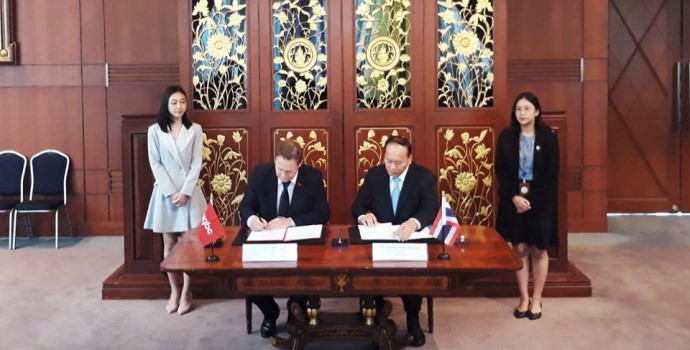 The agreement grants ADPC the status of an international organization in Thailand, with a set of privileges to facilitate the operations in the country. As an intergovernmental organization, ADPC would also be entitled to some immunities enabling it dedicate more resources to implement its vision of safer communities and sustainable development through disaster risk reduction across Asian and the Pacific.

Over three decades of experience in disaster risk reduction

ADPC was established in 1986 as a regional capacity building training center on the recommendation of a special committee set up by three United Nations Organizations.

Over the past 30 years, ADPC has worked closely with international and regional cooperation mechanisms to help put the ‘action’ into global frameworks. ADPC has also helped governments in Asia and the Pacific advance their commitments made to global frameworks from the UN International Decade for Natural Disaster Reduction through to the present Sendai Framework for Disaster Risk Reduction 2015-2030.

ADPC was a part of efforts to shift the focus from disaster response to more sustained commitment to preparedness, mitigation and reduction capabilities and multi-stakeholder systems approach at the regional and national levels. ADPC contributes to the discourse of disaster risk reduction by functioning as an interface between global, regional, and national actions.

ADPC has been helping member states follow up on their commitments to global platforms, frameworks and action plans through programs and projects. Through Regional Consultative Committee on Disaster Management (RCC), ADPC brings inputs from member countries back to global fora.

RCC was established in 2000 to promote peer advocacy and exchange of experiences in disaster risk reduction. As the RCC Secretariat, ADPC helps bring National Disaster Management Organizations (NDMOs) of 26 member countries in Asia and the Pacific together to achieve common goals in DRR, explore ways to transform policies into practice, and promote regional cooperation.

ADPC's Board of Trustees (BoT) Meeting

Earlier in the day, the BoT members were briefed about the technical and operational aspects of the organization during the first BoT meeting which was attended by all charter countries. They provided inputs and advice to different strategic and policy documents including the 2020 work plan.

Professor Dr. Krasae Chanawongse and Dr. Jingjai Hanchanlash were invited as members of the BoT for a period of one year.